Copyright: © 2017 Akita S, et al. This is an open-access article distributed under the terms of the Creative Commons Attribution License, which permits unrestricted use, distribution, and reproduction in any medium, provided the original author and source are credited.

Background: Neurotropin, a non-protein extract derived from inflamed rabbit skin following inoculation with vaccinia virus, is an analgesic agent. The mechanism of action of neurotropin has been partially clarified. No experimental study, however, has been undertaken to assess oxaliplatin-induced neurotoxicity using quantitative in vitro high-throughput image analysis. In the present study, to elucidate the action of neurotropin on dorsal root ganglion (DRG) neurons, we explored the antioxidative and anti-inflammatory activity of neurotropin. We assessed the viability and morphological changes in cultured rat DRG neurons treated with oxaliplatin and neurotropin.

Methods: We plated dissociated DRG neurons from female Sprague-Dawley rats (100-120 g) into 96-well plates and added oxaliplatin and/or neurotropin. The cells were examined with a fluorescence microscope, ImageXpress. The images were analyzed with high content image processing software, MetaXpress. Cells treated with neurotropin and oxaliplatin were lysed in Pierce RIPA Buffer and subjected to western blot analysis.

Results: Significant increases in neurite length, neurite area, cell body area, and neurite branching were observed in the presence of neurotropin in DRG neurons treated with oxaliplatin. When the highest concentration of neurotropin, 40 neurotropin units (NU) mNU/mL, was applied, a marked effect was seen. Neurotropin did not affect the phosphorylation of c-Jun N-terminal kinase, but suppressed the phosphorylation of p38. This finding suggests that neurotropin reversed oxaliplatin-induced apoptosis via suppression of the p38 mitogenactivated protein kinase signaling pathway.

Conclusion: The results of this in vitro study suggest a possible role for neurotropin as a useful neuroprotective and anti-apoptotic agent.

Colorectal cancer, which is a major global public health problem, is the most commonly diagnosed cancer and the fourth cause of cancer death worldwide [1]. However, colorectal cancer death rates declined by about 3% per year for both males and females between 2003 and 2012 [2]. Oxaliplatin, a platinum-based chemotherapy drug, is effective in the treatment of advanced metastatic colorectal cancer. However, it causes serious acute neurotoxicity (triggered by cold exposure) and chronic peripheral neurotoxicity (degeneration of sensory and motor nerves) in patients. Peripheral neurotoxicity is the most frequent dose-limiting toxicity with oxaliplatin [3]. A previous study demonstrated that a large percentage of patients underwent dose reductions, which can significantly affect the efficacy of treatment [4].

Oxaliplatin is degraded to a variety of reactive intermediates, including oxalate and dichloro (1, 2-diaminocyclohexane) platinum [8]. In rats, repeated administration of oxaliplatin causes cold hyperalgesia in the acute phase and mechanical allodynia in the chronic phase [9]. Oxalate derived from oxaliplatin is implicated in cold hyperalgesia but not mechanical allodynia [9]. Chronic neurotoxicity is difficult to treat. Therefore, use of analgesics in the clinical management of chronic neurotoxicity is important.

Neurotropin, a non-protein extract derived from inflamed rabbit skin following inoculation with vaccinia virus, is an analgesic agent. Neurotropin has been used clinically for many years in Japan for the treatment of various types of chronic pain, including post-herpetic neuralgia, subacute myelo-optic neuropathy, lower back pain, and other neuropathies. The mechanism of action of neurotropin has been partially clarified. No experimental study, however, has been undertaken to assess oxaliplatininduced neurotoxicity using quantitative in vitro high-throughput image analysis. In the present study, to elucidate the action of neurotropin on DRG neurons, we explored the antioxidative and anti-inflammatory activity of neurotropin. We also examined the effects of neurotropin on neurotoxicity in rat DRG neurons using the ImageXpress screening system at 10× magnification. This screening system for evaluating neurotoxicity would benefit from automated and quantitative in vitro assays that observe morphological changes in DRG neurons.

We hypothesized that oxaliplatin causes neuronal synapses to deteriorate in the early phase, finally causing neurite degeneration and death of neurons. Thus, we used the ImageXpress screening system to assess synapse plasticity and changes in neuronal morphology to assess putative neuroprotective effects of neurotropin. Thus, we used the ImageXpress screening assay to quantify the morphological changes in neurites and cell bodies. After image acquisition, the images were auto-quantified by specialized image analysis software, MetaXpress Version 1.7. The analysis data are potential indicators of neurotoxicity, and we were able to quantify changes in the morphology of these neurons under different conditions.

Here, we report a new way of quantifying morphological changes in cultured rat DRG neurons treated with oxaliplatin and neurotropin utilizing this automated, quantitative, highthroughput imaging system. Using this assay system, we were able to quantify cell and neurite parameters.

The main contributions of this paper are: (1) we found significant increases in neurite length, neurite area, cell body area, and neurite branching in the presence of neurotropin in DRG neurons treated with oxaliplatin. (2) We demonstrated that neurotropin reversed oxaliplatin-induced apoptosis via suppression of the p38 mitogen-activated protein kinase signaling pathway.

All animal experimental protocols were approved by the Institutional Animal Care and Use Committee of Ehime University, and the experiments were conducted according to the Ethical Guidelines for Animal Experiments of Ehime University. Sixweek- old female Sprague-Dawley rats (Charles River, Yokohama, Japan) were housed individually and maintained under light/ dark cycles, with food and water available ad libitum. After 1 week of acclimation, the rats were anesthetized with isoflurane and euthanized. Primary cultures of adult DRG neurons were established as previously described [16]. Briefly, ganglia from the thoracolumbar region were dissected out from the rats and digested in Ham’s F-12 medium (Wako, Osaka, Japan) containing 2 mg/mL collagenase (Worthington Biochemical Corporation, Freehood, NJ) at 37°C for 120 min. Subsequently, the ganglia were incubated in Ca2+/Mg2+-free Hanks’ balanced salt solution (HBSS; Sigma-Aldrich, St. Louis, MO) containing 2.5 mg/mL trypsin (Sigma-Aldrich) at 37°C for 15 min. Ganglia were then triturated using a fire-polished glass pipette in HBSS and purified by density gradient centrifugation (5 min, 200×g) with 30% Percoll (GE Healthcare Bio-Science Corp., Piscataway, NJ). The isolated cells were plated at a density of 5000 cells/well in 96-well plates coated with poly-l-lysine (Sigma-Aldrich). DRG neurons were cultured for 2 weeks in Ham’s F-12 medium containing 10% fetal bovine serum (Hyclone, Logan, UT), 2% B-27 serumfree supplement (Thermo Fisher Scientific, Rockford, IL), and 1% penicillin-streptomycin-amphotericin B suspension (Wako) at 37°C in a humidified 5% CO2 atmosphere.

The cells were examined with a fluorescence microscope, ImageXpress Micro (Molecular Devices, Sunnyvale, CA). The images were analyzed with high content image processing software, MetaXpress (Molecular Devices). The images were acquired with a 600 ms exposure time. Neurites and cell bodies were identified using the Angiogenesis module of MetaXpress. Neurite parameters were set to a 2-pixel minimum and a 22-pixel maximum, and cell body parameters were set to a width of over 22 pixels. Total neurite length, total neurite area, total cell body area, and total neurite branching per well were determined using the ImageXpress screening system. The Angiogenesis module has low time complexity and is suitable for this analysis. The algorithm flowchart is shown in Figure 1. 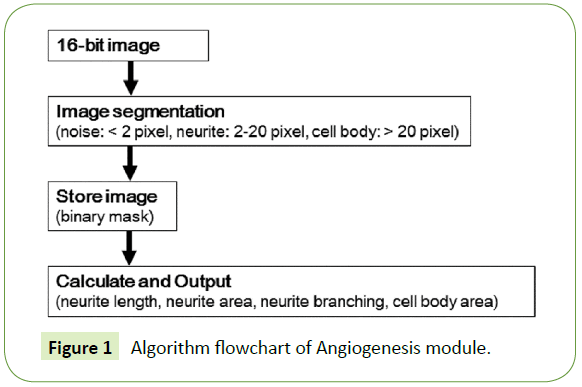 The toxicity of neurotropin was assayed using the direct cell counting function of the ImageXpress software. Two weeks after seeding the DRG neurons, different concentrations of neurotropin were added to the 96-well plate. The cultures were further incubated for 1 week, and then neuronal nuclei were stained with Hoechst 33342 (0.1 mg/mL) for 20 min at room temperature. Six replicates of all experiments were performed. The relative cell viability (%) was expressed as the percent of untreated control cells in cell culture medium without neurotropin. The cell counting algorithm, which is the cell scoring application module of MetaXpress software, detected stained nuclei in each well of the 96-well plate.

The viability of DRG neurons exposed to neurotropin Expression of TRX in DRG neurons In this report, we describe an automated, quantitative, highthroughput imaging system for multiparametric measurement of the cellular response to investigate the efficacy of neurotropin. In vitro high-throughput screening assays are needed to examine and quantitate the cytoprotective effects of drugs on DRG neurons. High-throughput imaging of neurons is particularly useful for toxicity screening, as it can measure cell viability and generate multiparametric readouts [17,18].

Oxaliplatin treatment simultaneously decreases the total RNA content of DRG neurons and alters the DRG neuronal size [20]. Oxaliplatin induces global transcriptional arrest, leading in turn to neuronal atrophy. DRG neurons may be especially vulnerable to oxaliplatin-induced neurotoxicity because they require high levels of global transcriptional activity. The data presented in this paper demonstrated that oxaliplatin reduced the cell body size. In contrast, cell body size was maintained in the presence of neurotropin. These considerations have led us to hypothesize that neurotropin protects DRG neurons from oxaliplatin-induced inhibition of transcription.

Oxaliplatin, which is a platinum-based anticancer drug, causes peripheral neurotoxicity by damaging DRG neurons. This mechanism of action involves platinum binding to DNA bases, which inhibits DNA replication and transcription, resulting in tumor cell cycle arrest and apoptosis [23]. Our results indicated that neurotropin prevented oxaliplatin-induced neurotoxicity and cell death in cultured DRG neurons. MAPK signaling plays an important role in the sensitivity to anticancer drugs [24]. Activated MAPK transmits extracellular signals to regulate many cellular processes such as cell proliferation, migration, differentiation [25], and apoptosis [26]. Six mammalian MAPK signaling pathways have been characterized in detail: extracellular signalregulated kinase-1/2 (ERK1/2), ERK3/4, ERK5, ERK7/8, JNK, and the p38 isoforms α/β/γ(ERK6)/δ [27-30]. Stress-activated MAPK, p38 MAPK, and JNK play an important role in the treatment outcome and sensitivity to anticancer drugs [24]. Treatment with oxaliplatin activates phosphorylation of p38 MAPK [31]. The activation of JNK and p38 MAPK is critical for induction of apoptosis [32]. Western blot analysis was performed to detect JNK, pJNK, p38, and pp38 protein levels in DRG neurons following oxaliplatin treatment (Figure 5). We observed that neurotropin did not affect the phosphorylation of JNK but suppressed the phosphorylation of p38 (Figure 5). This finding suggests that neurotropin may alleviate oxaliplatin-induced apoptosis via suppression of the p38 MAPK signaling pathway.

Although the mechanism underlying oxaliplatin-induced neurotoxicity is not clearly understood, oxaliplatin may generate formation of reactive oxygen species, which could interfere with the antioxidant defense system, causing cytotoxic effects and apoptosis [33-36]. TRX is a multifunctional protein with a molecular mass of 12 kDa that acts as an antioxidant and antiapoptotic molecule [36,37]. TRX is a binding partner of apoptosis signal-regulating kinase 1 (ASK1) and a negative regulator of ASK1 [38]. TRX directly binds to ASK1 and inhibits ASK1 kinase activity [38]. ASK1 is a MAPK kinase kinase (MKK) that activates p38 MAPK (via activation of MKK3/MKK6) [39]. In this study, we also examined the expression of TRX by western blotting (Figure 6). Treatment of neurotropin enhanced the expression of TRX in a concentration-dependent manner (Figure 6), inhibited activation of the p38 pathway (Figure 5), and protected DRG neurons from oxaliplatin-induced neurotoxicity (Figures 3 and 4). These results suggest that neurotropin may alleviate oxaliplatin-induced apoptosis via the ASK1-p38 signaling pathway in DRG neurons through the induction of TRX.

Neurotropin is a well-known analgesic agent, but its neuroprotective effects have not been investigated. Neurotropin enhances cytoprotective effects against a variety of oxidative stressors in lung cells [40]. The effect mediated by the induction of TRX attenuates reactive oxygen species production [40]. The mechanism of pain relief by neurotropin is believed to be inhibition of kallikrein-kinin activity [41,42]. Neurotropin contains a variety of non-protein components, which may mediate antioxidative and anti-inflammatory activity. Cytoprotective effects of TRX on oxidative lung injury have been observed [40,43]. Taken together with our in vitro data, the induction of TRX after neurotropin treatment may inhibit apoptosis in DRG neurons.

Significant increases in neurite length, neurite area, cell body area, and neurite branching were observed in DRG neurons in the presence of neurotropin. Neurotropin provided neuroprotective effects against oxaliplatin-induced neurotoxicity. The results of these in vitro studies suggest a possible neuroprotective and anti-apoptotic role for neurotropin. Further studies are needed to elucidate roles for neurotropin in DRG neurons.

We thank Nippon Zoki Pharmaceutical Company for the generous gift of neurotropin. The authors also thank Takeshi Kiyoi at the Division of Analytical Bio-Medicine, the Advanced Research Support Center (ADRES), Ehime University for his technical assistance.

The authors report no conflicts of interest in this work. The authors received no financial support for this study. All relevant data are included in this paper.