Electrochemical Determination of Phosphate in Freshwater Free of Silicate Interference

Copyright: © 2016 Bian C, et al. This is an open-access article distributed under the terms of the Creative Commons Attribution License, which permits unrestricted use, distribution, and reproduction in any medium, provided the original author and source are credited.

This paper proposes an electrochemical method for phosphate determination with oxalic acid as masking agent to eliminate silicate interference in freshwater. An electrochemical cell including electrochemical threeelectrode system, reaction zone, inlet and outlet was designed and fabricated to detect phosphate by Sequential Injection Analysis (SIA). The influence of the masking agent and its concentration on the determination of phosphate were investigated. With 0.01% oxalic acid as masking agent, better signal amplitude and less signal distortion were displayed. The reason may be that the
oxalic acid replaces molybdosilicate easier than molybdophosphate. In this way, oxalic acid inhibits silicate interference and shows less influence on phosphate determination. The linear ranges of phosphate from 0 to 1.0 mg/L were displayed with oxalic acid as mask reagent in freshwater. For natural samples, the deviation between spectrophotometric and LSV methods is less than 10%. The experimental results indicated that the proposed method can be applied to in situ monitoring of phosphate.

Phosphate as an important part of phosphorus, is an essential macronutrient in freshwater that can strongly influence the organisms’ growth as primary element of phospholipids and Adenosine Triphosphate (ATP) [1]. Imbalance of phosphate level could cause severe medical states. Over the past few decades the concentrations of phosphate has increased significantly due to intensified agriculture, industry, and traffic [2]. Phosphate plays a crucial role in carbon cycle and the sequestration of limnetic carbon dioxide that can lead to eutrophication in freshwater [3]. With the rapid increase of phosphate demand of people in daily life, the pollution of phosphate constitutes a significant challenge and the determination of phosphate is becoming more and more important. In recent years, techniques have been developed for quantitative analysis of phosphate in freshwater based on its reaction with molybdenum salts in acidic medium to form a molybdophosphoric complex in the pH range 0.5-2.0. This technique based on optical method such as spectrophotometry has received a wide acceptance because of its precision [4-6]. For example, some photometric devices have been applied to the spectrophotometry determination of phosphate [7] and other ions, such as methylenediphosphonic acid, were selected as fluorescent sensor for phosphate recognition by spectrophotometry [8,9]. Many Flow-Injection Analysis (FIA) [6,10] and Sequential-Injection Analysis (SIA) [6,11,12] methods have been reported for spectrophotometric determination of phosphate. However, they are restricted by turbidity interference, unstable due to the fact that highsalinity samples can produce refractive index effects with more than one analyte [13-15] and spectrophotometry methods require complex, expensive and bulky equipment and are not consistent with site applications.

Miniaturization and energy saving are needed for in situ monitoring of phosphate. Electrochemical methods have advantages over stability and electrodes can be miniaturized by Microelectromechanical Systems (MEMS) technique. Alternate methods based on the electrochemical determination of molybdophosphoric complex have been proposed recently [15,16]. Chromoamperometry [17], cyclic voltammetry [10,18] and pulse voltammetry [15,19] have been examined for the phosphate detection. Reductions of molybdate (VI) to molybdate (IV) and molybdate (IV) to molybdate (I) are performed, producing the molybdenum blue compounds, which are intensely electroactived and improve the sensitivity of the method [17].

This paper describes a method that can reduce silicate interference for electrochemical determination of phosphate based on cathodic reduction of molybdenum. Sequential injection system and electrochemical detection cell were established for experiments and for in situ automatical monitoring of phosphate. The optimal conditions to form the molybdophosphate complex in freshwater medium were determined by addition of sulphuric acid and sodium molybdate to the solution containing orthophosphate. Oxalic acid and citric acid were subsequently devised as inhibitor. Oxalic acid displayed better anti-interference performance than citric acid, because the molybdosilicate undergoes a ligand exchange reaction with oxalate, producing silicate and molybdo-oxalate. The molybdophosphate complex is detectable by Linear Sweep Voltammetry (LSV) with an average precision of 10% compared with spectrophotometric phosphate detection in the natural samples. The method is based on SIA and the formation of reduced molybdesilicate acid using oxalic acid to improve the selectivity of phosphate.

The electrochemical determination of phosphate is based on an electrometrical cell assembling with three–electrode system, inlet and outlet. The conceptual graph of the electrometrical cell is presented in Figure 1A. The volume of the electrochemical cell is about 300 μL. The three–electrode system includes a column gold working electrode, a column platinum counter electrode and an Ag/AgCl/KCl reference electrode (Aida Tec.Co.Ltd). Instruments used in all experiments in sequential injection mode were produced by Valco Instruments Co. Inc. Solutions were driven by a syringe pump and eight-port rotary valve, according to Figure 1B. 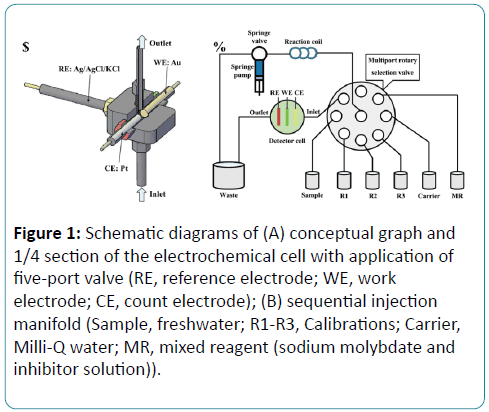 The working electrode is polished with lapping film sheet (3 M aluminum oxide, 1 μm) 22 and electrochemically cleaned in 0.5 mol/L sulfuric acid solution by cyclic voltammetry (5 cycles, from 1.5 to 0.0 V, 50 mV/s) before each measurement.

The Springe Valve (SV) connects the Multiport Rotary Selection Valve (MRSV) with Reaction Coil (RC). Sodium molybdate, inhibitor solution reagent and samples were selected respectively by MRSV and then sequentially aspirated in RC by SV. The SV stops every time when MRSV is rotating to avoid bubble. SV pumps the mixed solution through reaction cell for electrochemical detection to waste.

Reductions of molybdate were performed in the cell in an acidic medium (pH 1.0), which is optimized. For the linear sweep voltammetry measurements, molybdophosphoric performed four calibrations with the two oxidation peaks and the two reduction peaks. The most sensitive voltage was selected as the calibration line.

The freshwater samples were collected from Weiming Lake, Tsinghua Lotus Pond, The Old Summer Palace’s lake and Wanquan River in Beijing. And all of them were from surface water environment with low concentration of phosphate. Samples were collected and stored in 500 mL Teflon bottles. These samples were adjusted to acidic by adding 1 mL sulfuric acid. The concentrations of phosphate in these samples were analyzed by the fabricated electrochemical cell using linear sweep voltammetry. For comparison, spectrophotometric method was also used to detect the phosphate.

Spectrophotometric determination of phosphate freshwater samples was done with a UV spectrophotometer (Lianhua Tec.Co.Ltd, China) using 10 mm quartz cuvette (Lianhua Tec.Co.Ltd, China). Before that, the samples were digested using the digesting unit of 5B-2P total phosphorus detection equipment manufactured by Lianhua Tec.Co.Ltd. Freshwater samples were first mixed with K2S2O8 solution in reaction tubes with well shaken. The mixtures were then put into digest equipment and heated at 120C for 30 minutes. The digested samples were mixed with ammonium heptamolybdate ((NH4)6Mo7O24•1/2H2O), antimonyl potassium tartrate (KSbC4H4O7•1/2H2O) and ascorbic acid (C6H8O6) for the spectrophotometric detection. The absorbance was registered at 700 nm according to the standard method of Water qualitydeterminations spectrophotometric method [22]. The baselines were done with standard solutions. Reproducibility tests were performed and the precision of 10% in the concentration around 0.02 mg/L was found. This precision is obtained by a multiplication of the standard deviation by two (2σ).

The concentrations of silicate in these collected freshwater samples were detected by Pony Testing International Group, which is a qualified water quality-detecting institute, according to the standard spectrophotometric method.

Reagents formation in the electrochemical cell

Phosphate is not an electroactive species while the electrochemical detection is possible in the presence of molybdate salts and in acidic media (at pH 1.0). The electroactive phosphomolybdate complex is formed by the reaction between phosphate and molybdate salt to form the Keggin anion (PMo12O403-) according to reaction (1) [17]. Voltammetry of the Keggin anion formed shows two reduction waves and two oxidation waves [23].

The molybdosilicate complex is formed by the reaction (2) between hexafluorosilicate and molybdate salt in an acidic solution to form Keggin anion.

There is an obvious problem of cross interference in the real water samples, which contain both silicate and phosphate. The standard method recommended by the spectrometric determination of phosphate is based on the addition of oxalic acid to prevent the formation of molybdosilicate by the reaction (3) after formation of both heteropolyacids [11]. The first two classes of heteropolyacids built on the electrochemical cell adopt bidimensional and tridimensional crystal structure, respectively (Figure 2), from which molybdosilicate may be easily intercalated or extracted by oxalic acid. For electrochemical detection of phosphate, the reported method to dissolve this problem was based on the controlling of pH. Jonca et al. indicated that there are two clearly reduction waves for each species and achieved an appropriate ratio of protons/molybdates close to 70 using proton exchange membrane [15]. Furthermore, each step of the reaction of molybdosilicate from silicic acid and molybdic between pH 1 and pH 2 was clarified by Electrospray Ionization Mass Spectrometry (ESI-MS), and the molybdic acids were decomposed at pH 1.0 [24]. In our paper, the influence of masking agent was observed by linear sweep voltammetry using sequential inject method. The mixtures adding oxalic acid or citric acid in an optimized concentration mask the interference of silicate under a proper pH condition. 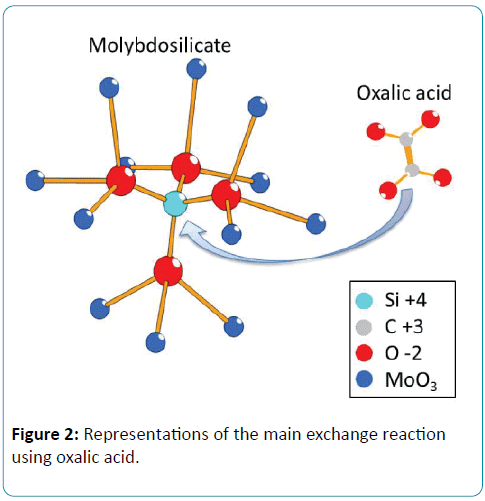 To optimize the linear sweep voltammetry of the formed Keggin anion, influence of pH and molybdate concentration were investigated. A pH range between 0.92 and 2.00 was examined by LSV in 20 mM molybdate and the best results were obtained at pH around 1.0. Figure 3A shows the variation of current for phosphate solution with the concentration of 4.0 mg/L at different pH. The influence of the molybdate concentration was studied by LSV from 0 to 40 mM at pH 1.00. Results revealed that the reductive current comes to the highest value with the molybdate concentration of 20 mM as shown in Figure 3B. At the pH higher than 1.0, more time was required for the formation of heteropolyacids [24]. Additionally, the reductive current of molybdophosphate was decreased when pH was higher than 1.0 for sequential injection system.

The electrochemical properties of the fabricated electrochemical system to the phosphate were verified with different concentrations of phosphate. As shown in Figure 4A, there are two reduction peaks. The first reduction peak reveals that Mo (VI) is reduced to Mo (IV) at 0.25V, and the second reductive peak is produced by the reduction from Mo (IV) to Mo (II) at 0.15V. With the increasing of the phosphate concentration, the reductive peak current increases.

Compared the current responses of these two reduction peaks, the second peak at 0.15V has a higher sensitivity than the first peak at 0.25V. As shown in Figure 4B, a dynamic linear relationship between the reduction peak current at 0.15V and phosphate concentration from 0 to 0.07 mg/L and from 0.07 to 1.0 mg/L, respectively. The sensitivities are -38.35 μA/ [mg•L-1] and -1.26 μA/[mg•L-1], respectively, with the correlation coefficient over 99%. The detection limit is 4.0 μg P/L (S/N = 3). The experiment result shows that this electrochemical cell using LSV gets a higher current response and less background current comparing to differential pulse voltammetry and chronoamperometry. 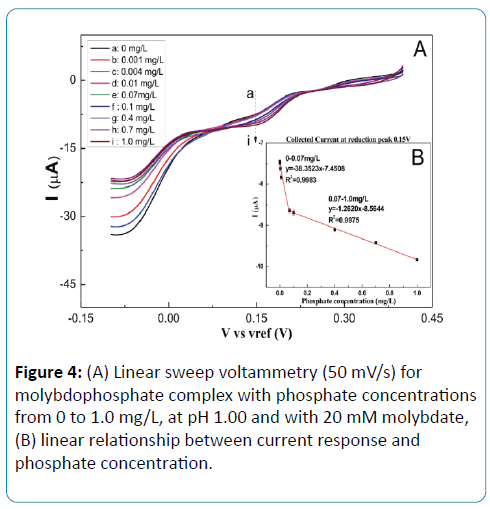 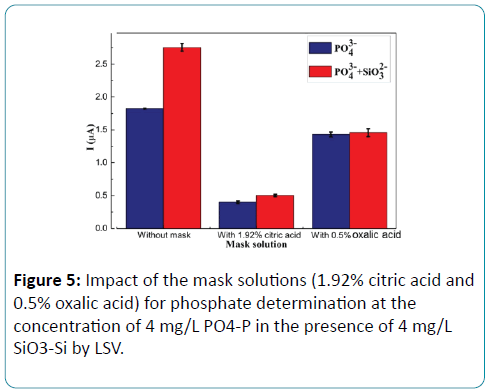 Figure 5: Impact of the mask solutions (1.92% citric acid and 0.5% oxalic acid) for phosphate determination at the concentration of 4 mg/L PO4-P in the presence of 4 mg/L SiO3-Si by LSV. 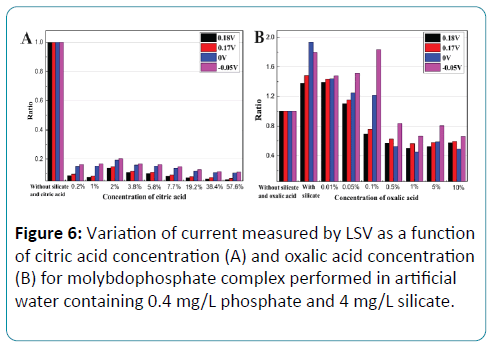 Detection of phosphate in the presence of silicate 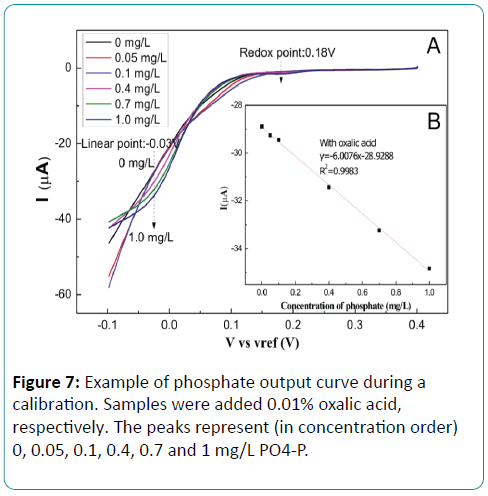 Trace levels of phosphate in freshwaters were detected by linear sweep voltammetry method and spectrophotometric analysis, respectively. Concentrations of silicate in freshwater samples were detected by Pony Testing International Group. Table 1 shows that the standard deviation obtained are between 0.1 μg/L and 8.4 μg/L for linear sweep voltammetry and between 1.7 μg/L and 2.3 μg/L for spectrophotometric.

An acceptable agreement between the LVS and the classical spectrophotometric method was obtained, which confirms that the interference from silicate was inhibited successfully by the masking agent of oxalic acid.

The authors express our deep gratitude to the staff at the State Key Laboratory of Transducers Technology at the Institute of Electronics, Chinese Academy of Sciences for clean room and microfabrication support. We acknowledge financial support from the National Natural Science Foundation (No. 61372053), and the National Basic Research Program of China (973 Program, No. 2015CB352105).