The antibacterial substances produced by lactic acid bacteria render them more advantageous in the competition with other microorganisms. Present study aims to evaluate the antibacterial activity of lactic acid bacteria (LAB) isolated from raw milk, curd, tomato and dosa batter, against common enteric pathogens. The antagonistic properties of these isolates against Escherichia coli, Staphylococcus aureus, Pseudomonas aeruginosa and Bacillus cereus were examined using agar well diffusion method. Four LAB namely Lactobacillus salivarius, Lactobacillus delbrueckii,subsp. bulgaricus, Lactobacillus fermentum and Lactobacillus acidophilus, were effective against all selected pathogenic strains. Amongst the four isolates, Lactobacillus salivarius exhibited the highest antibacterial activity, against all the indicator pathogens tested except Staphylococcus aureus. Its activity was maximum against E.coli with a Zone of Inhibition (ZOI) ranging from 18.7 to 21.3 mm and least for Staphylococcus aureus (10Â±1.1 mm). Lactobacillus bulgaricus also showed antibacterial property against all tested pathogens showing highest activity against Pseudomonas aeruginosa (17 Â± 1.7 mm) and least against E.coli (8 Â± 1.4 mm), which was in direct contrast to Lactobacillus salivarius. Lactobacillus acidophilus showed greater activity against Staphylococcus aureus (17 Â± 0.8 mm) and least against E.coli (8 Â± 1.7 mm). Least antibacterial property was observed in Lactobacillus fermentum, with a ZOI in the range of 2.5-7 mm. Overall, the isolated LAB showed the remarkable inhibitory effect against both Gram positive and Gram negative pathogenic strains. However, the spectrum of inhibition was different for the isolates tested. These results suggest that this potent isolates could be used as a natural biopreservatives in different food products.

A balance among microbial groups present in human gut is crucial for maintaining health. When this balance is disturbed, the host–microbe relationship can progress towards a disease state. In addition, it has been described that micro biota deviations are associated with enhanced risk of specific diseases including inflammatory bowel diseases, irritable bowel disease and antibiotic associated diarrhea and it has been associated with allergy, obesity and diabetes [1]. Thus, the maintenance of micro biota equilibrium is important to preserve and to promote health. Consumption of food containing live bacteria is the oldest and still most widely used way to increase the number of advantageous bacteria called “probiotics” in the intestinal tract [2]. Noteworthy, there are a large number of probiotic foods which date back to ancient times which are mostly originated from fermented foods as well as cultured milk products [3-10]. The quest to find food ingredients with valuable bioactive properties has encouraged interest in lactic acid bacteria (LAB) with probiotic attributes such as antibacterial activity against pathogenic microorganisms [11], antiviral activity [12], anti-yeast property [13], anti-mutagenic [14], anti-platelet aggregation [15], and anti-oxidant attributes [16] etc.

In general, it is believed that probiotics help keep up the balance between harmful and beneficial bacteria in the gut thus maintaining a healthy digestive system [10]. The health claims of probiotics range from regulation of bowel activity and well-being to more specific actions such as, antagonistic effect on the gastro enteric pathogens like Clostridium difficile, Campylobacter jejuni, Helicobacter pylori and Rotavirus etc [17]. Some are known to neutralize food mutagens produced in colon, shifting the immune response towards a Th2 response, alleviating allergic reactions, and lowering serum cholesterol [18].

The mechanism of action of probiotics with antibacterial properties is maybe due to the production of bacteriocins such as nicin [19] or lowering the pH by producing acidic compounds like lactic acid [20]. Probiotic strains compete with other infectious bacteria for nutrients and cell-surface and help toward them off by inhibiting their colonization [21]. A few strains are also known to produce active enzymes which inhibit other pathogenic bacteria [22]. The health benefits of probiotics have always been investigated with regard to their capability to sustain their availability, viability [23], digestibility, and rendering of their health benefits to the host without altering the safety [24] and the organoleptic properties of the food in which they have been incorporated [25]. Today, viable probiotic strains with beneficial functional properties are available in the market as components of foods and beverages, in fermented dairy products like yogurt [26] or as probiotic fortified foods as well as food preservatives [27]

Samples for isolation of LAB

The samples for the isolation of LAB from raw milk, curd, tomato and dosa batter was allowed to ferment at ambient temperature (32oC±2).

Isolation of LAB from the selected sample was carried out using the microbial pour plate method. Appropriate dilutions of the samples prepared in saline (0.85% NaCl) were pour plated into MRS medium, for isolation of LAB. The plates were then incubated at 37°C±2°C, for a period of 24-48 hrs. Colonies which were different from each other in their morphology and phenotypic appearance were picked up and inoculated in agar slants. Colonies which were sub-surface were inoculated as stab.

The presumptive LAB species were purified using their respective isolation media by re-streaking on plates until only a single type of colony was present. The different pure cultures so obtained were characterized for their colony morphology and subjected to Gram staining. Only Gram positive, nonmotile, rod shaped bacteria, showing phenotypic characters similar to Lactobacillus species on MRS agar media (L. salivarius, L. delbrueckii subsp. bulgaricus, L. fermentum and L. acidophilus) were selected for further experiments. The cultures were stored and maintained at 4°C on MRS agar slants/stabs for further studies.

Media for growth of pathogens

The pure cultures of food borne pathogens namely E. coli, S. aureus, P. aeruginosa and B. cereus were inoculated from slants to brain heart infusion broth (BHIB). After 24 hr incubation at 37°C, the culture broth was centrifuged and the pellet obtained was suspended in 9ml saline. This suspension was used for inoculation of the pathogenic strain to nutrient agar plates for the antibacterial activity determination of the sample filtrate.

The agar well diffusion method was used to determine the antibacterial property of the LAB isolates. A 24 hr culture of the pathogens (E. coli, S. aureus, P. aeruginosa and B. cereus), grown in BHIB at 37°C was suspended in saline. A lawn of the indicator strain was made by spreading the cell suspension over the surface of nutrient agar plates with a sterile cotton swab. The plates were allowed to dry and a sterile cork borer of diameter (5mm) was used to cut uniform wells in the agar. Each well was filled with 60±l culture free filtrate obtained from the LAB isolates. After incubation at 37°C for 48 hrs, the plates were observed for a zone of inhibition (ZOI) around the well. Results were considered positive if the diameter (mm) of the ZOI was greater than 1mm. The experiment was carried out in triplicates and activity was reported as diameter of ZOI ± SD.

The identification of potent isolates upto species level was done based on the characteristics of Lactobacillus as described in Bergey’s Manual of Systematic Bacteriology [28] and a descriptive table given by Nair and Surendran [29]. The cultures were subjected to a battery of biochemical tests which included fermentation of different carbon sources, acid and gas production from glucose, catalase test, growth at different temperatures (15°C, 45°C and both) and hydrolysis of arginine.

Lactic acid bacteria (LAB) were isolated from raw milk, curd, tomato and dosa batter on MRS agar initially. All the isolates obtained were morphologically characterized by the colony characteristics of the isolates obtained, along with their Gram reaction and microscopic examination. Only Gram positive, non-motile, rod shaped bacteria, showing phenotypic characters similar to Lactobacillus species on species specific MRS agar media (L. salivarius, L. delbrueckii subsp. bulgaricus, L. fermentum and L. acidophilus) were selected for further experiments(composition of media not given here). The basis for selection was that these isolates could probably belong to the Genus Lactobacillus, which has been shown to have probiotic attributes [30].

The agar well diffusion method was used to assess the antibacterial activity of the selected LAB namely L. salivarius, L. delbrueckii subsp. bulgaricus, L. fermentum and L. acidophilus isolated from varied sources. Their antibacterial properties were tested against four enteric pathogenic bacteria namely E. coli, S. aureus, P. aeruginosa and B. cereus. Results show that the spectrum of inhibition was different for the isolates tested. Table 1 gives the results for the antibacterial activity of the isolates in terms of diameter of the zone of inhibition (ZOI). A diameter >1mm around the well was considered as a positive result. It was assumed that greater the diameter of the ZOI, greater was the antibacterial activity of the isolates. Results indicate that L. salivarius had the highest antibacterial property, against all the indicator pathogens tested except S. aureus, amongst the four species. Its activity was highest against E.coli with a ZOI of 20 ± 1.3 mm and least for S. aureus (10±1.1 mm). Isolate L. delbrueckii subsp. bulgaricus also showed antibacterial property against all tested pathogens with its activity being highest against P. aeruginosa (14 ± 1.7 mm) and least against E.coli (8 ± 1.4 mm), which was in direct contrast to isolate L. salivarius. L.acidophilus showed greater activity against E. coli (12 ± 0.8 mm) and least against S. aureus (8 ± 1.7 mm). Least antibacterial activity against all the tested indicator pathogenic bacteria was observed in L. fermentum, with a ZOI in the range of 2.5-7 mm. The degree of antibacterial property among the isolates was in the order of L. salivarius> L. delbrueckii subsp. bulgaricus >L.fermentum>L. acidophilus. It is however difficult to comment on the reason for this variability in the antibacterial property amongst the species since each one was different from the other. Interestingly, L. salivarius and L. fermentum were equally antagonistic against both gram positive (Staphylococcus aureus, Bacillus cereus) as well as gram negative (Escherichia coli and Pseudomonas aeruginosa) pathogenic bacteria.

Table 2 gives the results of the various biochemical tests performed on the selected isolates. The most potent probiotic candidate which showed the highest antibacterial property against all the food borne pathogens tested was identified as L. salivarius. During the biochemical tests, two species were found to be weakly catalase positive, however, in spite of this, they were subjected for biochemical tests since many native Lactobacillus have been previously reported to possess pseudocatalase activity [31-33]. However, the use of probiotics should be further investigated for their possible benefits but also side-effects if any. 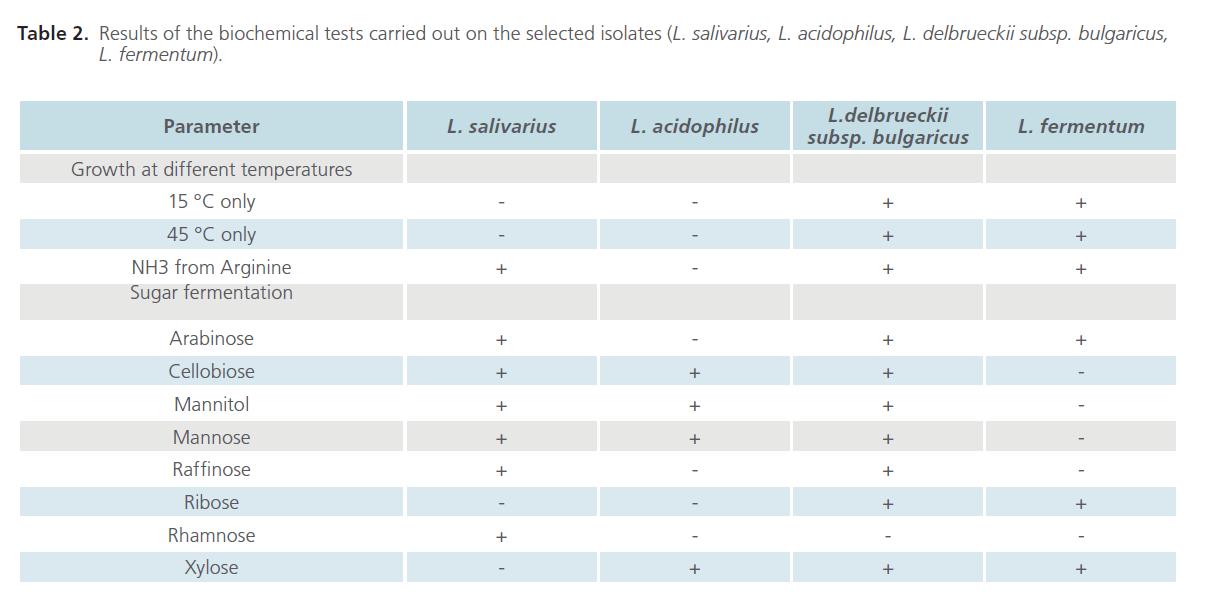 In conclusion, the results obtained from this study demonstrated the remarkable antibacterial attributes of the isolated lactobacillus species from different common food source. According to previous studies, a large number of lactic acid bacteria strains with different bioactive potentials especially in the form of antibacterial properties have been identified from a variety of plant sources mostly in the form of fermented and pickled vegetables [35-40]. These scientific evidences have been a motivating factor to choose a food product prepared from different vegetables which could further confirm the results of this study. On the other hand, such positive outcomes would be a leading point towards application of simple worthy traditional methods such as fermentation in producing natural healthy food products and encouraging consumers to include such valuable food items into their eating habits. Hope these friendly food groups would be added to daily diet of each individual to improve their body immunity hence, decreasing unnecessary intake of chemical antibiotics. However, further in vitro and in vivo studies are required according to selection criteria including adhesion to mucosal cells of the gastrointestinal tract, bile salt and acid tolerance, bile salt hydrolase activity, viability, resistance to antibiotics, safety and organoleptic properties to be applicable in different food products such as starter culture in fermented dairy products.

The authors wish to thank Dr. Ravi Kumar, Director & Management of CloneGen Biotechnology(P) Ltd, for their co-operation and support for present study