Copyright: © 2016 Pozzati E. This is an open-access article distributed under the terms of the Creative Commons Attribution License, which permits unrestricted use, distribution, and reproduction in any medium, provided the original author and source are credited.

Polycystic kidney disease (PKD) is commonly associated to cerebral aneurysms. We describe a young man with PKD and a middle cerebral aneurysm associated also to two temporal cavernous malformations. This association has been never reported. We suggest that CMs may belong to the phenotype of PKD and that may should be screened in PKD patients with cerebral haemorrhage.

A 45-year-old man with polycystic kidney disease receiving haemodialysis and intermittent anticoagulation three times a week underwent a neuroradiological screening in view of a renal transplantation. He inherited PKD from his maternal side but genetic studies were not performed. Cerebral MRI showed a 4 mm aneurysm of the right middle cerebral artery and two intracerebral lesions in the right temporal lobe consistent with multiple cavernous malformations (Figure 1a and 1b). His family history did not reveal any ancestor affected by this vascular malformation. A conservative approach of his vascular lesions was preferred. Figure 1: a) MRI T2 GRE sequences showing two small 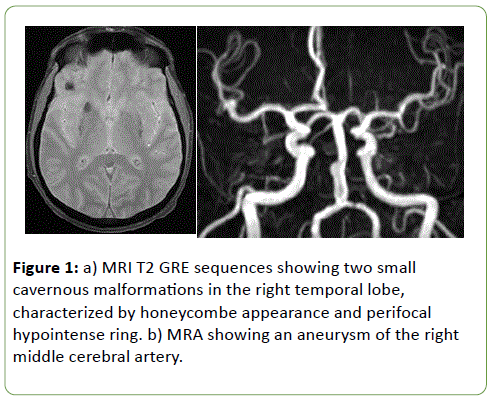 Polycystic kidney disease (PKD) is the most common hereditary kidney disease: there are two major forms, autosomal dominant and recessive, related to PKD1 and PKD2 genes encoding two membrane proteins, policystin 1 and 2. Approximately 3 to 7 percent of PKD patients have brain aneurysms and the risk of developing an aneurysm in PKD is five-fold greater [1].

The occurrence of intracranial bleeding in patients with PKD is generally related to hypertensive intracerebral haemorrhage or to aneurismal subarachnoid haemorrhage. Cerebral Cavernous Malformation (CCM) is one of the four types of cerebral vascular malformations and is constituted by multiloculated mulberrylike structures composed of brittle endothelial sinusoids embedded in a collagen matrix. It exists in two forms, sporadic and familial, which present, respectively, single and multiple lesions. Mutations affecting three distinct loci (CCM 1-3) are responsible for inherited cases. The pathogenesis of CCMs follows the two-hit model where both alleles coding for a particular gene must be rendered inactive before a lesion formation occurs: it is possible that the second hit might arise from mutation of any factor in a related disease pathway or in another disease gene (transheterozygous mutation) or from a genetic cause predisposing to mutation [2].

Interestingly, the two-hit mechanism has been demonstrated also in cyst formation in PKD and reciprocal molecular effects cannot be excluded. The association of PKD to CCMs has been never reported and its clinical and genetic profile should be better understood.

The association of PKD to aneurysm and CCMs may be not fortuitous and raises several concerns regarding the pathophysiology of these lesions. Multiplicity of CCMs without familiarity is very rare. The origin of the combination aneurysm- CCM in the same vascular territory may be due to the regional lack of the vascular integrity generally promoted by polycistin 1 which is expressed in the endothelium and intercellular junctions during angiogenesis [3]. Curiously, the pathophysiology of CCM bleeding depends on the disruption of interendothelial junctions and ensuing vascular hyperpermeability [4].

CCMs may present with seizures, headache, mass effect and, most importantly, cerebral haemorrhage which may be fostered, among others, by multiplicity and anticoagulation [5]. Chronic anticoagulation in dialyzed PKD patients with CCMs may further alter the haemorrhagic potential of CCMs.

Our case suggests that CCMs may belong to the phenotype of PKD in an unclear association and reciprocal relationships with cerebral aneurysms and that the occurrence of intracranial bleeding, besides hypertension and aneurysm, may be due to a CCM.