Copyright: © 2016 Alina Z. This is an open-access article distributed under the terms of the Creative Commons Attribution License, which permits unrestricted use, distribution, and reproduction in any medium, provided the original author and source are credited.

Therapeutic effects of albendazole on kidney functions and urinary excretion of florfenicol was determined in goats. After restraining the animals, 600 mg dose of florfenicol was administered intramuscularly. Blood and urine samples were collected, at different time intervals, post-medication. After a washout period of 7 days, florfenicol was administrated along with a 150 mg dose of albendazole. Blood and urine samples were collected at similar time intervals as done previously. Serum was separated by centrifugation and both serum and urine samples were stored at -20ºC until analysis. Drug concentration in samples was determined by using HPLC method. Endogenous creatinine is used as an index of GFR (glomerular filtration rate) and was estimated both in serum and urine samples. Concentrations of drug and creatinine were used to calculate the renal clearance and urinary excretion. Calculated Mean ± SE of renal clearance of florfenicol was 3.32 ± 0.60 and 3.90 ± 0.52 ml/min/kg when given alone and along with albendazole respectively. Influence of serum concentration, diuresis and urinary pH on renal clearance was determined by least square regression/ correlation analysis. Mean ± SEM of urinary excretion expressed as cumulative percent of dose excreted in the urine of goats was 35.81 ± 2.47 and 37.48 ± 2.60, when florfenicol was given alone and along with albendazole respectively. Conclusion and Results were analyzed by student “t” test and it is concluded that there is significant drug- drug interaction between florfenicol and albendazole.

In pharmacokinetic interactions effect of one drug is altered by another drug by modifying its absorption, distribution, metabolism or excretion. These interactions involved alterations in absorption from target site, plasma protein binding, carrier transport, liver enzymes and kidney function. The mechanism most commonly involved in pharmacokinetic drug-drug interactions is induction or inhibition of drug metabolizing enzymes [4]. Most of the drugs are metabolized by hepatic cytochrome P450 enzymatic family. When an inducer or inhibitor of CYP450- is administered concomitantly with another drug that is metabolized by this enzyme the possibility of drug interaction exist. If the interacting drug is an enzyme inducer it enhances the metabolism of other drug and thus reduces pharmacological effect of that drug and leads to pharmacotherapy failure, On the other hand if interacting drug is enzyme inhibitor, cause toxicity of other drug [5].

Florfenicol is a C-3 fluorinated synthetic analogue of thiamphenicol which is structurally related to chloramphenicol. The drug has known bacteriostatic activity against micro-organisms that are chloramphenicol and thiamphenicol resistant. Florfenicol is resistant to inactivation by bacterial acetyl-transferase because it has lesser exposed sites for bacterial acetylation as compared to chloramphenicol and thiamphenicol. The drug has broad spectrum of activity and is used worldwide for the treatment of infections caused by bacteria specially infections of respiratory tract, it is also used to treat in infections caused by Pasteurella species, Actinobacillus species, Mycoplasma mycoides, Staphylococcus aureus, Salmonella species and E.coli in food animals [6]. Florfenicol produce its bacteriostatic action by inhibiting protein synthesis in bacteria. The drug is used extensively in animals due to good absorption, high volume of distribution, high bioavailability and less side effects. Unlike other fenicols florfenicol does not cause reversible and dose dependent suppression of bone marrow due to inhibition of synthesis of mitochondrial protein. It also lacks the ability to cause aplastic anemia, which is observed with chloramphenicol that is why safer to treat infections in food producing animals [7].

The present study was conducted to investigate the effect of albendazole on the kidney functions and urinary excretion of commercially available preparation of florfenicol in ten healthy goats after single intramuscular administration.

The study was conducted in ten clinically healthy adult non pregnant non-lactating goats of beetle breed, between 12- 36 months of age and 29.5-33 kg body weight. The goats were housed in animal shed with concrete floor, Department of Clinical Medicine and Surgery, University of Agriculture Faisalabad. All animals were maintained on fresh green fodder and water ad lib. Experiments were performed during the month of January 2015. The body weight and age of each animal was recorded. The study protocol was approved by the Ethical Review Committee, University of Agriculture Faisalabad, Pakistan.

The following commercial preparations of florfenicol and albendazole were used for the pharmacokinetics evaluation and effects;

Blood and urine samples under different time course intervals were taken for the determination of kidney functions and urinary excretion of florfenicol in goats with and without albendazole.

A sterile disposable balloon catheter was inserted into urinary bladder through urethra of each animal after lubrication with paraffin gel. The external opening of catheter was connected through rubber tubing to a urine-collecting reservoir in which all the voided urine was collected. A control urine sample was collected before the drug administration. Urinary bladder of each animal was washed with 20 ml of distilled water after 45 minutes of drug administration. Other samples were collected at 0.75, 1.25, 1.75, 2.25, 2.75, 4, 5, 6, 8, 10 and 12 hours intervals. After collection of samples pH and volume of urine was measured for each sample. Samples were stored at -20°C until analysis.

Concentration of florfenicol in plasma and urine was determined by reverse phase high performance liquid chromatography with UV detector at wavelength 224 nm [8,9].

Calibration standards for blood samples were prepared by dissolving 200 mg of drug in 2 ml of HPLC-grade methanol (100 mg/ml), it was further diluted to 1.0, 0.1 and 0.01 mg/ml in methanol. The appropriate volumes of each dilution were added in 1.0 ml of blank serum to prepare serum florfenicol standards that covered the range of dilution from 0.025-10.0 μg mL-1.

Serum samples were separately extracted in ethylene acetate (1 ml: 2.5 ml). The tubes were rotated for 10 min and then centrifuged at 2000 RPM for 10 min as well. 2 ml of the organic layer was aspirated and evaporated under nitrogen. Each of the residues was dissolved in 0.375 ml of the solvent mixture of acetonitrile: water (1:3, v/v), vortexed, and then centrifuged again at 2000 RPM for 20 min at 4°C. The supernatant was separated, ﬁltered through a 0.45-μm nylon ﬁ lter. The drug containing solvent was dried under a stream of dry nitrogen at 40ºC and each sample was reconstituted in 1 ml of mobile phase. These prepared samples were vortex mixed for 1 minute, sonicated for 2 minutes, centrifuged at 1000 RPM for 10 minutes. Aliquots of each sample (20 μL) were injected in injection port of HPLC.

Urine samples were prepared by extracting the drug in ethyl acetate. First of all urine samples were diluted in double distilled water in ratio urine: double distilled water 1:10. Then 1 ml of these diluted urine samples along with 1 ml of 0.1 M pH 7.0 phosphate buffer and 4 ml of ethyl acetate were added to screw capped tubes. The tubes were vortex mixed for 10 minutes and then centrifuged at 2000 RPM for 10 minutes. Three ml of organic layer was aspirated and evaporated under nitrogen. The extracted sample was mixed with 100 μl of mobile phase. After that these prepared samples were vortex mixed for one minute, sonicated for two minutes and a 20-μl injection was made onto the chromatograph. 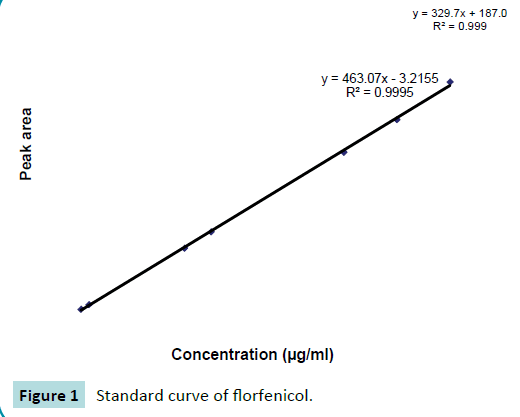 Determination of florfenicol in sample 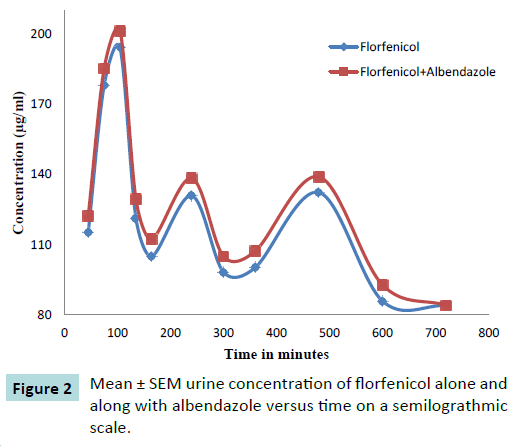 Figure 2: Mean ± SEM urine concentration of florfenicol alone and along with albendazole versus time on a semilograthmic scale.

Table 2 Milligram dose of Florfenicol excreted in urine following administration of florfenicol alone and along with albendazole in ten healthy adult goats. 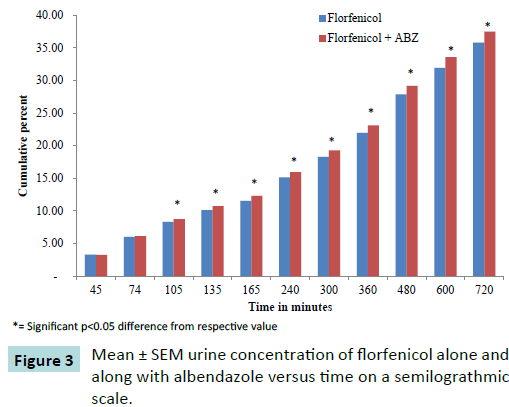 Figure 3: Mean ± SEM urine concentration of florfenicol alone and along with albendazole versus time on a semilograthmic scale. 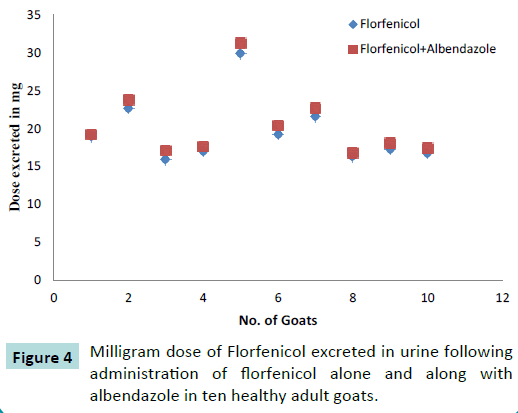 Figure 4: Milligram dose of Florfenicol excreted in urine following administration of florfenicol alone and along with albendazole in ten healthy adult goats.

Table 3 Percentage dose of Florfenicol excreted in urine following administration of florfenicol alone and along with albendazole in ten healthy adult goats.

Table 4 Cumulative percentage of dose of Florfenicol excreted in urine following administration of florfenicol alone and along with albendazole in ten healthy adult goats.

Table 5 Mean ± SE comparison of parameters following administration of florfenicol alone and along with albendazole in ten healthy adult goats. 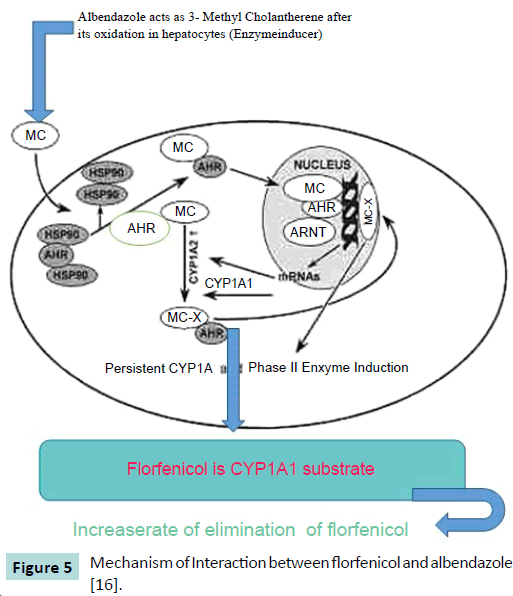 Figure 5: Mechanism of Interaction between florfenicol and albendazole [16].

AHR (Aryl Hydrocarbon receptor) is a transcription factor which is activated when a ligand aryl hydrocarbon e.g. benzimidazole attached to it. Aryl hydrocarbon receptors present in cytoplasm in an inactivated form attached with heat shock proteins 90 [11,12]. The mechanism of interaction between albendazole and florfenicol is best elaborated by the findings of Asteinza et al. [13] who elaborated the enzyme induction property of albendazole in rats and Gleizes et al. [14], they concluded that oxfendazole and albendazole act as 3-methylcholanthrene (3 MC) type inducer. By keeping these findings in mind, Goodman and Gilman [15] suggested that the hepatic enzyme induction cause decreased availability and increased renal clearance of the drug (florfenicol) by increasing the rate of metabolism by hepatocytes. The lower serum level and higher excretion of florfenicol in goats pretreated with anthelmintic drug like albendazole than the behavior of other drugs can be well described by its induction effect on microsomal enzymes of liver. CYP1A1 in liver converted 3-methylcolanthrene to 3-methylcholanthrene-X which is a reactive metabolite. These metabolic products reached the nucleus of the cell and make a complex with ArhNT (aryl hydrocarbon receptor nuclear trans locator), then this complex covalently binds to CYP1A1 and 2 promoters and enhance the transcription of genes responsible for production of CYP1A1 and 2 [16].

The analyses were performed by using an HPLC chromatograph in Department of Pharmacy, Physiology and Pharmacology, University of Agriculture, Faisalabad, Pakistan. Department has provided instruments and chemicals. Sample collection was author’s research.

The authors declare that there is no conflict of interest.