Copyright: © 2016 Kadavakollu S. This is an open-access article distributed under the terms of the Creative Commons Attribution License, which permits unrestricted use, distribution, and reproduction in any medium, provided the original author and source are credited.

Background: Translational errors can give rise to an accumulation of unfolded proteins leading to the activation of the unfolded protein response. Among the various mechanisms that exist to reduce these errors, uracil modifications, specifically 5-methoxycarbonylmethyluridine (mcm5U), 5-methoxycarbonylmethyl-2- thiouridine (mcm5s2U) and 5-carbamoylmethyluridine (ncm5U), in tRNA increase fidelity by improving binding to A-ending codons in mixed codon boxes. Dph3 is a protein involved in diphthamide synthesis, but also plays a role with the elongator complex. Results: Activation of ER-stress response was observed through the presence of increased splicing of HAC1 mRNA in dph3 mutants Cell viability was decreased in mutants stressed by paromomycin as demonstrated using cytotoxic assays. Dph3 mutants were partially rescued from cell stress by the complementation of DPH3. lacZ reporter assays showed an increased unfolded protein response in mutants lacking Dph3 under both basal and stressed conditions. Conclusion: This experiment revealed the critical role of Dph3 in normal cell?s ability to produce proteins accurately especially when under external stressors. The results showed that the DPH3 gene in Saccharomyces cerevisiae was involved in the prevention of translational errors and the presence of Dph3 lowered ERstress response factors.

The immensely important genetic information carried by DNA is critically dependent on preserving the molecular structure of DNA and proper execution of transcription and translation. Unfortunately, cells are exposed to potentially damaging factors from both within and without the cell that threaten the fidelity of protein synthesis. Chemicals such as free radicals (oxygen or nitrogen oxide) and aromatic hydrocarbons or environmental agents such as X-rays and UV-light can modify DNA bases (mutations) or cause single-stranded or double-stranded DNA breaks [1-3]. This damage can cause cell death in the extreme cases, or worse, lead to carcinogenesis [4]. Fortunately, cells have developed DNA damage response mechanisms which regulate gene expression to coordinate proper DNA repair and replication [5].

In addition, various biological checkpoints in the cell exist to ensure that proteins are synthesized properly from the DNA code. Cells respond to stress at the translational and post translational levels [6]. Transcriptional regulation of gene expression is the main mode of regulation of gene expression; however, for certain genes, translational regulation also plays a major role. During the step of translational elongation, the tRNA, which is an adaptor molecule between the mRNA and the protein, serves an important role in the translational regulation of cellular responses to stress and is a biomolecules which is very heavily modified [7,8]. One example of the 90+ known modified versions of nucleosides that exist are uracil modifications which have been shown to improve the translation of transcripts rich in AGA and GAA codons [9-11]. These findings suggest that the anticodons containing mcm5U, mcm5s2U, and ncm5U (Table 1) modifications at the wobble position have enhanced affinity for specific codons and such modifications can regulate the speed of translation elongation [8]. Thus, in a mixed box, these modifications can enhance binding to A-ending codons and restrict binding to U- and C- ending codons [9-11]. A failure to restrict anticodon binding to U- and C- ending codons leads to incorporation of the wrong amino acid and promotes translational infidelity.

Dph3 (also known as Kti11) is one of the five proteins (Dph1 to Dph5) required for diphthamide biosynthesis [12] although it also has a known, second role in the effective functioning of the Elongator complex (Elp1 to Elp6) [13,14]. Recently, Nedialkova and Leidel examined the role of uracil modifications in optimal codon translation rates and showed the formation of protein aggregates in ncs2Δelp6Δyeast [15]. Since Dph3 is also known to be involved in the wobble uracil modification [16-18], we predicted that a deficiency in Dph3-catalyzed modifications would allow binding of anticodons to near-cognate codons and promote translational infidelity. Pharmaceutical agents that promote translational infidelity can be used to phenocopy the wobble uracil modification deficiency [19]. Aminoglycoside antibiotics, such as paromomycin, target the region of codon-anticodon pairing and cause translational errors by altering the dynamics of codon-anticodon interactions. While misincorporation at premature stop codons can be used to rescue proteins from premature termination of translation, it also has the potential to promote errors and lead to misfolded proteins [20]. Misfolded proteins are, in general, insoluble, easily aggregate and are toxic to cells. In order to prevent toxicity, these proteins are refolded in the endoplasmic reticulum. As the cell accumulates misfolded proteins, it triggers a cascade of pathways called the endoplasmic reticulum stress response or ER-stress pathway. ER-stress is involved in the quality control of proteins in the endoplasmic reticulum (ER) and targets proteins that cannot be successfully folded for degradation via an endoplasmic reticulum assisted degradation pathway [21,22].

The unfolded proteins in the ER are folded by the ER-chaperone called as Kar2. In the process of folding, the Kar2 dissociates from Ire1, leading to dimerization and activation of Ire1. The activated Ire1 splices HAC1 mRNA in the cytoplasm, resulting in the translation of HAC1 mRNA into Hac1 protein. The Hac1 protein enters the nucleus and binds to UPRE (unfolded protein response element) which promotes genes involved in protein folding including HAC1 [23,24]. Thus the synthesis of proteins involved in protein folding is amplified by hyperactivation of ER-stress, ultimately leading to increased protein folding. The paromomycin binds at the codon-anticodon interface in the ribosome, increasing translational errors and leading to increased production of unfolded proteins. Aminoglycoside antibiotics have been previously shown [9] to increase splicing of HAC1 and transcription of Kar2 indicating that translational errors can indeed hyperactivate ER-stress.

For sensitivity assays, the overnight culture of wild-type, dph3 mutants, and dph3 mutants with the re-expressed DPH3 gene were grown overnight in SD-Ura media and plated in SGal/-Ura plates containing 100 μg/ml of paromomycin. The plates were incubated at 30°C for 3 days and imaged using BIO Rad Gel Doc EZ imaging system.

Both the dph3 mutant and wild-type cells were grown to ˜5 × 106 cells/ml in YPD and treated with 100 μg/ml paromomycin for 60 minutes. Afterwards, the RNA was carefully purified using the RNeasy Mini Kit and analyzed as described [10]. Detection of the RNA was facilitated using the Chemiluminescent Nucleic Acid Detection Module [10] (Pierce; Rockford, IL).

dph3 mutants have a higher level of translational infidelity. The AWY14 wild type and dph3 mutants cells that were grown overnight in SD-ura were stressed using paromomycinan aminoglycoside antibiotic known to induce translational errors. The dph3 mutants showed an increased sensitivity to paromomycin (Figure 1) when observed after incubation at 30°C for three days. As seen in Figure 1, these mutants can be rescued from paromomycin by overexpressing DPH3 in the mutants. Furthermore, the full effect of the cytotoxic agent is readily apparent in the mutants at 100 μg/mL, with large increase in dose having little discernible effect. 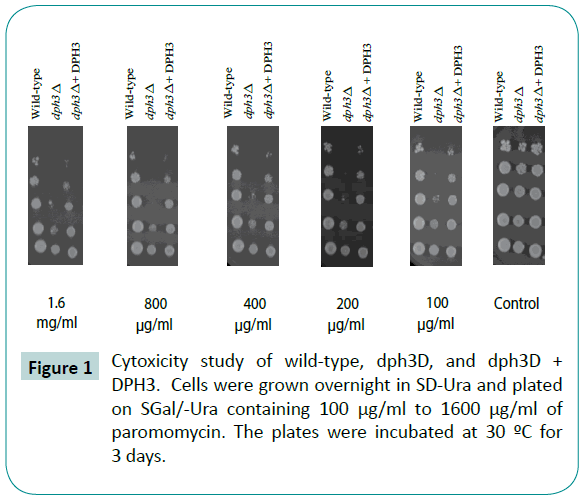 Figure 1: Cytoxicity study of wild-type, dph3D, and dph3D + DPH3. Cells were grown overnight in SD-Ura and plated on SGal/-Ura containing 100 μg/ml to 1600 μg/ml of paromomycin. The plates were incubated at 30 ºC for 3 days.

The dph3 mutants have an increased unfolded protein response reporter activity under basal conditions, which is further increased in the presence of paromomycin.

AWY14 cells were used where the lacZ gene is placed under the control of KAR2 promoter containing the UPRE element. The binding of Hac1 protein to UPRE element initiates the transcription of lacZ and KAR2 genes proportionately. The amount of lacZ protein levels in the cells is a direct indicator of Kar2 protein levels, and thus a measure of amount of unfolded proteins present in the cells. This conclusion is based on previous work [27] where the lacZ gene was put under the control of UPRE (unfolded protein response element). These researchers showed that since UPRE mainly regulates transcription of KAR2, the KAR2 transcript levels should be proportional to lacZ levels. Figure 2: Effect of Dph3 on the unfolded protein response shown as the average of 4 samples (Specific Activity = 1000*Absorbance / E*total protein) with error bars of ±SD. Wild type, knockouts, and knockouts with complementation of DPH3 were compared both with and without paromomycin. LacZ activity was used as the reporter.

The northern blots of wild-type and dph3 mutants were performed after cells were grown to mid log phase. One group was measured under basal conditions and the other treated with paromomycin for 1 hour. Figure 3 shows increased HAC1 splicing in dph3 mutants. 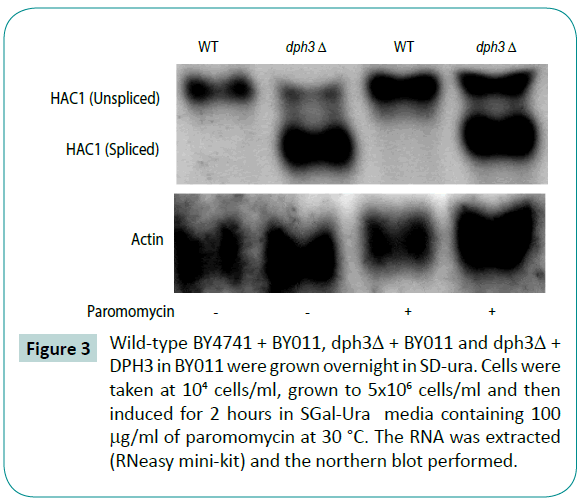 The Hac1 protein synthesized by the translation of spliced HAC1 mRNA enters the nucleus and binds to UPRE elements in protomers of genes like KAR2, causing their increased transcription and thus increasing the synthesis of Kar2 protein in response to unfolded proteins. The lacZ reporter used indicates the rate of transcription of genes regulated by UPRE like Kar2 and was observed to increase the activity of the UPR reporter in dph3 mutants. The reporter activity was further enhanced upon treatment with paromomycin indicating increased levels of unfolded proteins in dph3 mutants (Figure 2). Since the unfolded protein levels measured by UPR reporter and HAC1 splicing increased after paromomycin treatment we can conclude that it is indeed the increased translational errors in dph3 mutants that gives rise to hyperactivation of ER stress in the mutants.

This study revealed the critical role of Dph3 in the cell’s ability to produce proteins accurately. dph3 mutants showed a lowered viability especially when under chemical stress. In addition, the heightened levels of unfolded protein response markers observed in mutants lacking DPH3, demonstrated that this gene in Saccharomyces cerevisiae was indeed involved in the prevention of translational errors. Higher levels of lacZ in dph3 mutants were observed indicating an activated UPR. Dph3 protein added to the mutant cells achieved a partial rescue from translational errors indicated by slightly decreased lacZ levels. In addition, northern blot analysis showed an increased presence of the important UPR signaling pathway HAC1 spliced RNA in dph3 mutants.